I was lucky enough to be interviewed recently by Kate of Portable Magic. This link will take you to her blogging site or you can read the interview in full below…

Today I’m taking part in the blog tour for A Life Of Their Own. I’m sharing my Q&A with the author with thanks to Anne Cater for inviting me on the blog tour and to Pauline Tait for answering my questions!

Have you always wanted to write?

Hi, yes, I’ve been scribbling away quietly for decades. In fact, I had the idea for my first children’s picture book when I was in my early twenties but didn’t do anything with it for another twenty years.

What were your previous jobs?

I was a pharmaceutical technician for over twenty years before retraining to work in Primary Literacy Support. The latter was the most fulfilling, working with children who needed extra-curricular support, assessing them, creating individual learning plans to support their needs and then implementing these plans. It was a job I loved, but as my writing took off, I had a decision to make. Initially, I tried reducing my hours and doing both, but as events began to fill my diary, I realised that writing was the career I needed to focus on. Writing is something that’s mine, it personal! But I’m lucky, as I enjoy getting back into schools through my author visits.

Have they helped you with your writing process?

My years of experience working with children have been a great inspiration. Although I had drafted my first children’s picture book twenty years before, I was inspired to turn it into a finished manuscript while working in the school. But equally, these experiences have impacted the finished products too. The covers to my children’s books are tactile, the text and illustrations are laid out in a particular way to hold the attention of the most reluctant readers. There is also gender equality within the books, along with positive moral messages.

Moving on to your fiction for adults, what was your inspiration for A life of Their Own?

A Life of Their Own was a story that was bursting to get onto paper, so much so, that I had a solid draft within three months. It was born from a conversation I overheard between two women. One was talking about how she had to do things a certain way at the insistence of her partner, and it was abundantly obvious that there was, at the very least, coercive abuse behind the discussion. The woman herself, appeared oblivious. The person she was talking to stayed awkwardly quiet.

The fact she was so obviously unaware stayed with me. I found myself feeling angry that abuse, in any form, should be happening to anyone. I realised that I could write about it in a way that might help others, if I turned things around, ensuring my character recognised the signs and found a means of escape. That way I could hopefully help others to recognise the signs and inspire them to do the same. To do this, I had to write about a positive outcome after years of abuse.

How do you construct your characters? Do they have traits of people you know?

It’s unintentional if they do. But each character first appears as an image in my head. Everything from their appearance to their quirks, how they speak, how they laugh. Once I have the central characters to the story, I then document them in a notepad. I’m old school, I use excel for my word count, chapter notes etc, but characters and core ARC of the story are all in a single notepad dedicated to each book.

I note everything, from the basics such as hair & eye colour, height, build, age, what they do for a living and their backstory, right through to their oddities. Maybe a habitual gesture, an odour, a physical feature that stands out. Some of these won’t make it into the books, but it gives me a solid character to work with.

I also ensure my characters gel. Would they be drawn to each other in real life? Each relationship must be realistic to the reader, and if I’m going to pair them off a couple, they have to fit.

What does your writing process look like? Are you a plotter or a pantser?

I’m quite happily both. The story ARC must be plotted. The characters must be plotted, to a degree. But I find that my characters continue to develop as I write. For instance, Alice was initially a secondary character who served her purpose well near the beginning of A Life of Their Own, but as I was working on the final drafts of the novel, she began to filter in later in the book. Although completely unplanned, it turned out she was needed and is now a character I could follow up with if I ever decided to write a sequel.

How did you research? Did you enjoy it?

I love the research stage, but with A Life of Their Own, there were elements which were hard. To be truly authentic to the fears and emotions of anyone suffering from any form of domestic abuse or violence, I had to thoroughly research real life stories. Harrowing is the word I use to describe this research. But, at the same time there are immensely inspiring men and women out there who have come out the other end, having carved a new life for themselves. Some have moved on, closing the door firmly on darker years, while others still carry the emotional scars and will continue to do so for the rest of their lives.

My research was conducted online, many of the stories I read, and information I gained, came from anonymous sources as many spend the rest of their lives hiding from their past. Keeping their identity hidden is often seen as the only way of ensuring their past truly stays where it belongs.

This meant that I wasn’t far into my research when I decided that I would include the contact details to various charities around the world in the rear pages of the novel. These charities are there, ready and waiting, as a first port of call, no matter of a person’s gender or race.

Given the novel is set in America, I also had to research the local landscape, flora and fauna, for the state of Colorado. Ryan Lockwood is the Communications Manager for the
Colorado State Forest Service, and unknown to me at the time, he is also an author. So, when I contacted him asking if he would be happy to give me information on the local landscape, he was more than happy to do so. Many Americans, who know Colorado and have read A Life of Their Own have presumed I had visited, so the research was worth it.

Who are your favourite writers? Are you influenced by them?

Gosh, this is hard. I have so many! Like everyone else, there are writers I have enjoyed reading throughout the years, to the point where I have waited impatiently on their next release. But equally, I now have many author friends whose books I am enjoying immensely. There is a fresh breed of new authors out there who are just as talented but must work twice as hard to be recognised in the ever-changing world of publishing. My current read is ‘He Is Not Worthy’, a debut novel by poet Lis McDermot and it has me hooked to the point where I am struggling to put it down.

If you could invite three people, living or dead, to dinner, who would they be and why?

Sandi Toksvig, for her humour, intelligence and work in women’s equality.

Jameela Jamil, for her work with women and young girls on body image. She strives to encourage women of all ages to focus on what’s on the inside. As she states, “there’s so much more that defines them than just their looks.”

Emma Thomspon, for her work in both human and women’s rights.

Who would you least like to be stuck in a lift with and why?

Oh, now I have been stuck in a lift and it wasn’t pleasant! In the current climate, I’d have to say any member of the UK Government!

Who would play the main character/s in a film version of A Life of Their Own?

A younger Julia Roberts would have fitted the description of Kate perfectly, not that I had her in mind when I was conjuring Kate up. But she would have been able to play both Kate’s vulnerabilities and strengths perfectly.

And possibly Patrick Dempsey as Matthew.

What do you like to do in your spare time?

I love traveling, both within Scotland and abroad, cooking, baking, gardening current affairs and photography. I can lose hours taking pictures and editing them afterwards.

What is next for you?

The aim is to keep writing. I have a new series of children’s picture books in the pipeline which will allow me to keep visiting schools to inspire our younger generations in their own reading and writing.

And I’m also working on a new six-books series of novels too. They will fall into the suspenseful romance/contemporary romance genres. So, lots to do, but that’s just how I like it!

Just a Little Run Around the World by Rosie Swale Pope and from my childhood, Heidi by Johanna Spyri.

It’s a golden oldie but, An affair to Remember with Cary Grant and Deborah Kerr. I just love it and cry every time I watch it.

Yellow, the colour of the sun which brings us life and happiness… and of course, sun flowers!

The Isle of Skye. My husband and I have been going for over twenty years. Initially, we went with our children but once they were too old to be holidaying with their parent, we continued to go up annually, just the two of us. Now things have come full circle, and earlier this year we hired a house for a week and our children, and their partners came with us. It’s a place that my husband and I feel completely and utterly at home in. We normally stay on the edge of Portree and love to travel around the northern half of the island. We have our favourite walks and places to eat. But equally it’s the people on the island too. Over the years we have got to know some of them, and they recognise us as annual visitors.

Incidentally, the island has inspired a new series of novels that I’m working on just now. It was initially just to be a standalone read but when travel restrictions were imposed during Covid, I had to put it to the side as I was unable to travel up to complete my research. Now though, it will tie in nicely with my current work in progress and so I have plotted out a six-book series based around a fictional sea loch near Portree.

Oh, An Empire biscuit, without a doubt. But I chuck the cherry!

A Life Of Their Own is available from Amazon and all good book shops. 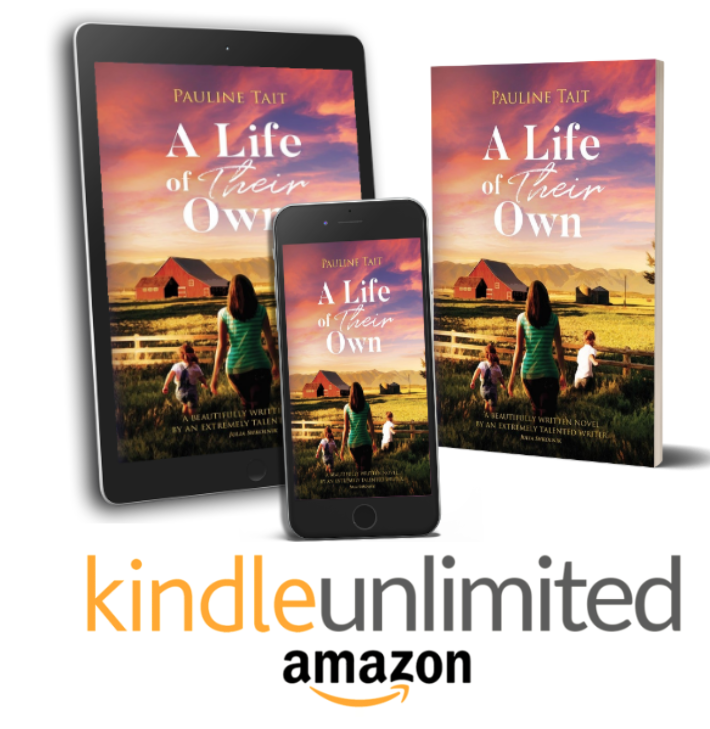